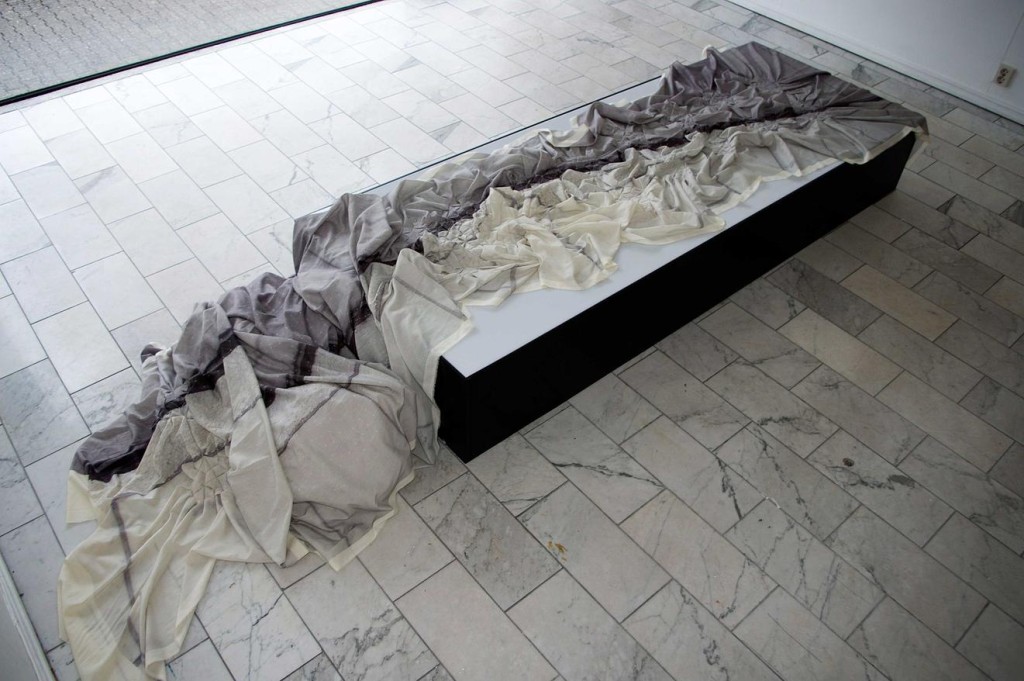 This post is the following part of Oslo Open Part 1: Interview with Viel Bjerkeset Andersen. At the Oslo Open event I also had the pleasure to meet with Artist Yola Maria Tsolis who works with textile and photography(Oslo Open, 2015). Her inspiration in origami has evolved into grids and patterns that constitute the base for her creations with fabric. The fabric, on the other hand, presents prints from photographs which have been processed and now present a new perspective of reality. The manipulation of photography merged with textile questions the photographic body itself.

Tsolis’ work feels fluent (Fig. 1) and I was very intrigued when she mentioned that she follows a very strict pattern. “It’s a system, it’s always there” (Tsolis, 2015). She explained that just like in nature her work is always based on a system grid, from the distance it might look chaotic but if look close enough the grid is there. I felt intrigued about these organic forms that follow such a strict structure but I also saw a connection with my own work in Graphic Design. As a User Interface Designer and Motion Graphics Artist, I start with a structured grid (Fig. 2) that evolves into complex patterns that eventually conclude in organic animations and fluid forms. Like with Bjerkeset Andersen’s views on Animation (Bjerkeset Andersen, 2105: 6.50) I felt that Tsolis had a native understanding of “the grid” and the methodologies that I use for my Design practice. Reflecting upon this I start seeing that we, practitioners from different fields, are more connected than I thought. It’s almost as we are all part of Tsolis complex system of organised chaos. 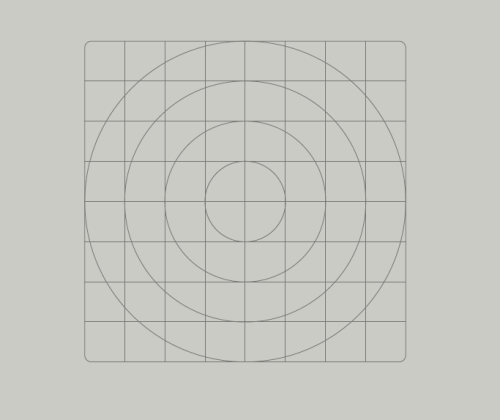 Tsolis sees the art world as a challenging arena and there is a lot of pressure for upcoming practitioners (Tsolis, 2015). It seems that this is nothing new, Bjerkeset Andersen also expressed her alienation with the art world when she begun her journey as an artist some 25 years ago (2015: 23.28). Reflecting upon Tsolis and Bjerkeset Andersen experiences I have the impression that the art world is very much disjointed and separated in cultural classes. It seems to me like there are two worlds: one that says what Art is and the other one that executes Art. Francisco Villarreal Terán, Professor of Fine Arts at the Universidad San Francisco de Quito in Ecuador, went even further when he expressed his concerns about the Art world to me in an email interview. Villarreal Terán mentioned that “there is a confusion about what Art is” and that “artists themselves often help to contribute to this confusion”. One of his concluding points was that “anything can, and is, considered Art today.” (Villarreal Terán, pers. comm. 10 May). Not only the Critics seem to have a wrong idea of what Art is but often even the Artists themselves too.

I think that there is a multilayered and complex discussion about Art in the Art world and I do not intend to contribute with a concluding statement. I do however want to conclude for myself that at the end of the day, as an Artist, you just have to do what you love to do. Only time can tell.

Note: Respecting the artist’s request for privacy, the audio recording interview with Yola Maria Tsolis is not available.

Villarreal Terán, F. (2015) ‘Response to questions about the Art World’ for IDI Research and Practice Blog [email] 9 May. fvillarreal@usfq.edu.ec